I watched a documentary last week that completely blew my mind. I truly have never been more inspired by the life of a person than I was by Bill Cunningham who, embarrassingly enough, I was unaware of before I watched this film. I sat there in absolute awe of how fearlessly he lived his life and how passionate he was about his craft. He was blunt with his opinions but never rude; only blunt for the sake of saying what he thought was right. It was clear to me that he never hesitated in trusting his gut when it came to capturing the unassuming moments of everyday life and how that is played out in street fashion. 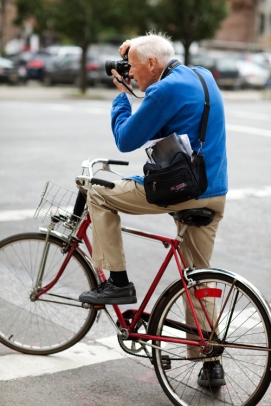 I’ve always been a self-conscious person, doubting my thoughts and comparing myself at every turn; paralyzed with fear at the idea of failing at anything. Over the past few years, this has led to a long struggle with immense social anxiety and as I watched this adorable old man bike defiantly through the streets of New York doing what he loved despite anyone’s thoughts on the matter, I felt an enormous weight lifting. In that moment, I was watching someone embody so much of what I’ve always wanted to be but have never been able to execute. The feeling of freedom was seeping through the screen and I was getting hype. Not only was his general “IDGAF but I’m still super approachable” demeanor entirely enthralling, but the way he viewed the world and believed in the importance of aesthetics as part of the human experience was like ripping a page out of my playbook.

And that was it. Bill gave me the courage to finally start the blog that I’ve been thinking about starting for years. This blog is essentially an experiment if I’m being honest. I’m interested in seeing if I can trust my gut and let my propensity for aesthetics be used to unashamedly just say something about anything for the first time in my life. I hope in addition to my self-liberation I can also provide some legitimate help and inspiration!

I'm an interior designer and a strong believer that the mug I choose to drink my coffee out of in the morning is just as much an art as the spaces I design for my clients. More info on what I'm doing here coming soon!